As a step mum you don’t have the same natural support network which new mums seem to develop from NCT classes to musical bugs lessons or baby yoga… as a stepmum it’s not usually part of your role – even if (like me) you are in the little ones life from a very young age.

When the little monster was a baby, I didn’t have (or want / expect) any alone time with him and I definitely didn’t take him to clubs or socialising events. From talking to my mum-friends it seems fairly common to develop and build a friendship group at these types of groups, who inevitably have children of a similar age and therefore face some of the same issues and decisions around the same time. (I’m not naive and I do realise that being a mother can be a very lonely place at times for all, step or birth)

For us step parents who don’t have our own children we miss out not only on the social side of “mumminess” but also on the natural support network which can develop from these relationships. From when to tell if your little one is ready to potty train to how to handle a supermarket tantrum, there is a group of other mums to talk to, complain to and help find a solution.

I was 23 when I became a ‘virtual-step-mum’ to the little monster, none of my close friends had children and I knew nobody who was caring for somebody elses child. The first year or so, there wasn’t much for us to think about – the monster was less than a year old and our access was so limited that there were no real decisions or approaches to to choose.

When he neared the ‘terrible twos’ we started having an abundance of behavioural issues and a tremendous lack of discipline with him. Our source of information and advice was really my family and Dr Google, with a bit of Super-Nanny mixed in. We did manage to find an approach to discipline that really works for us as a family and has turned around the monster enormously, I don’t think we’ve got past a second warning in over a year now which must be some kind of miracle!

During this period, it was sometimes really difficult, my partner and I would end up very frustrated and honestly at times I didn’t like the little monster very much! Here is a BIG difference – it’s ok for a mum to complain about her own child because everyone knows that she loves them to their core – they are part of her after all. When a ‘Dads girlfriend’ complains about the sprog however, this a different story – I couldn’t complain about the monster without silent judgement from other mums and with my childless friends, “Why are you bothering?!”.

Nobody really GOT it, that sounds a little dramatic I know but it’s true – I was pretty determined to have a good relationship with him and I really, really wanted to love him. I wanted us to be a perfect little family – and at times it just wasn’t. But I don’t give up that easy – so even though he isn’t “my” son I took responsibility and I felt like it was part of my responsibility to improve things – not just my partners.

During the past 4 years I have on many occasions been part of conversations with mothers who don’t see me as “one of them” and I often get the line “you don’t understand – it’s different when you have your own”. I’m not sure what this is based on as the majority of those mothers are not step-mums so surely they don’t understand what it’s like to be me either? 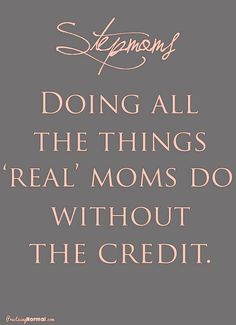 I’m not dismissive at all of the natural bond formed between mother and child, but I have been an integral part of the monsters life since he was 9 months old – and we’ve been on quite a journey together. I can’t compare it to a bond with biological children because I don’t have any but I do know the little monster and I do have a very strong bond with him. Still there is a potential benefit – if you’re ever at an event or kids party and don’t feel like making small talk just make the correction “Actually I’m not his Mum, his Dad is my partner” and watch the incredibly awkward reaction of the ‘real mums’ who will quickly excuse themselves almost every time!

Working my way in

I count myself as very lucky now that I can have “Mummy” conversations and not feel like a fraud – I still occasionally have to force my way in, especially with people I don’t know well and who understandably don’t comprehend the type of relationship I have with the little monster, but I’m confident enough to not be offended (for the most part) and prove my value through my actions and relationship with the little guy. And believe me I can talk potty-training just as well as any Mum – birth or otherwise!

2 thoughts on “Missing out the ‘Mummy circles’”

This is my one-sided view of our journey to becoming  a family. An honest opinion on the trials, tribulations and hopefully some of the joy.

Thank you for visiting